Do actresses get turned on?

I suppose so. Everyone does at some point. Now why exactly is Azuka asking such a strange question at 12:24am on a Saturday morning?

I don’t believe I’ve ever watched a TV show or movie without stopping to Google some interesting fact that comes up. Usually, that leads to me following more links and getting sidetracked for hours.

Tonight while watching a show where the actress chews on three stacked hamburger patties, I found myself wondering how many takes it took to get it right, and if she spat the food out right after — she didn’t swallow. I know wine-tasters have to do that with drinks.

I typed “do actresses” with the intention of following it up with “spit out food when making a movie” and Google suggested “get turned on.”

Apparently, there are thousands of people out there looking for an answer to this question.

I am now one of them.

I haven’t had very good experiences with dogs. They terrified me as a kid and one of my earliest scary memories involved having a neighbor’s growl at me. I took off and of course it chased me, caught up and pulled my shorts down. Everyone thought it was funny but I vividly remember lying face down with my shorts tangled around my ankles screaming because I thought I’d been bitten.

Most of our neighbors who had dogs went for the scary hulking ones so running away from them was something I got very used to. “Beware of wild dog” is a gate sign you find very frequently in Nigeria.

Cats on the other hand I always thought were cute. I don’t really want to own one though. Not enough time.

When I initially started looking for a place to live, I wasn’t particularly keen on living with pets because I’ve never lived with any. My potential landlady kept putting off my move in date. Luckily, the place next door was renting, which brings me to these guys. 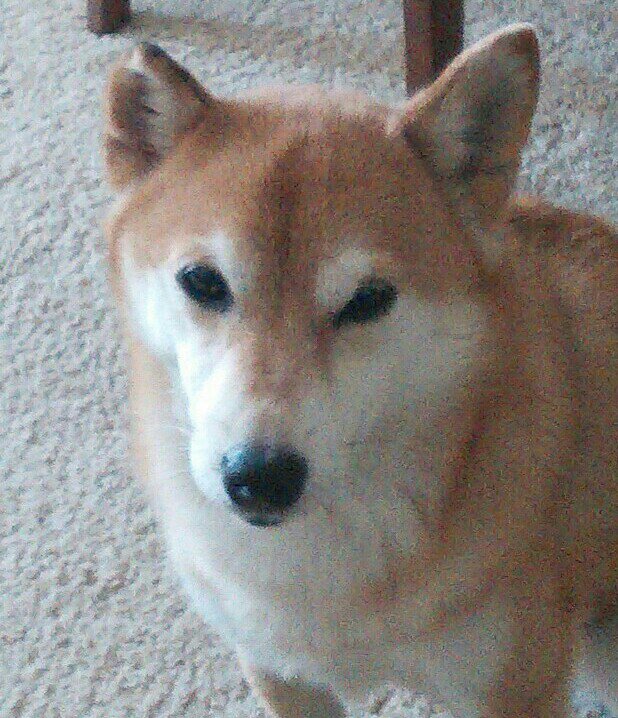 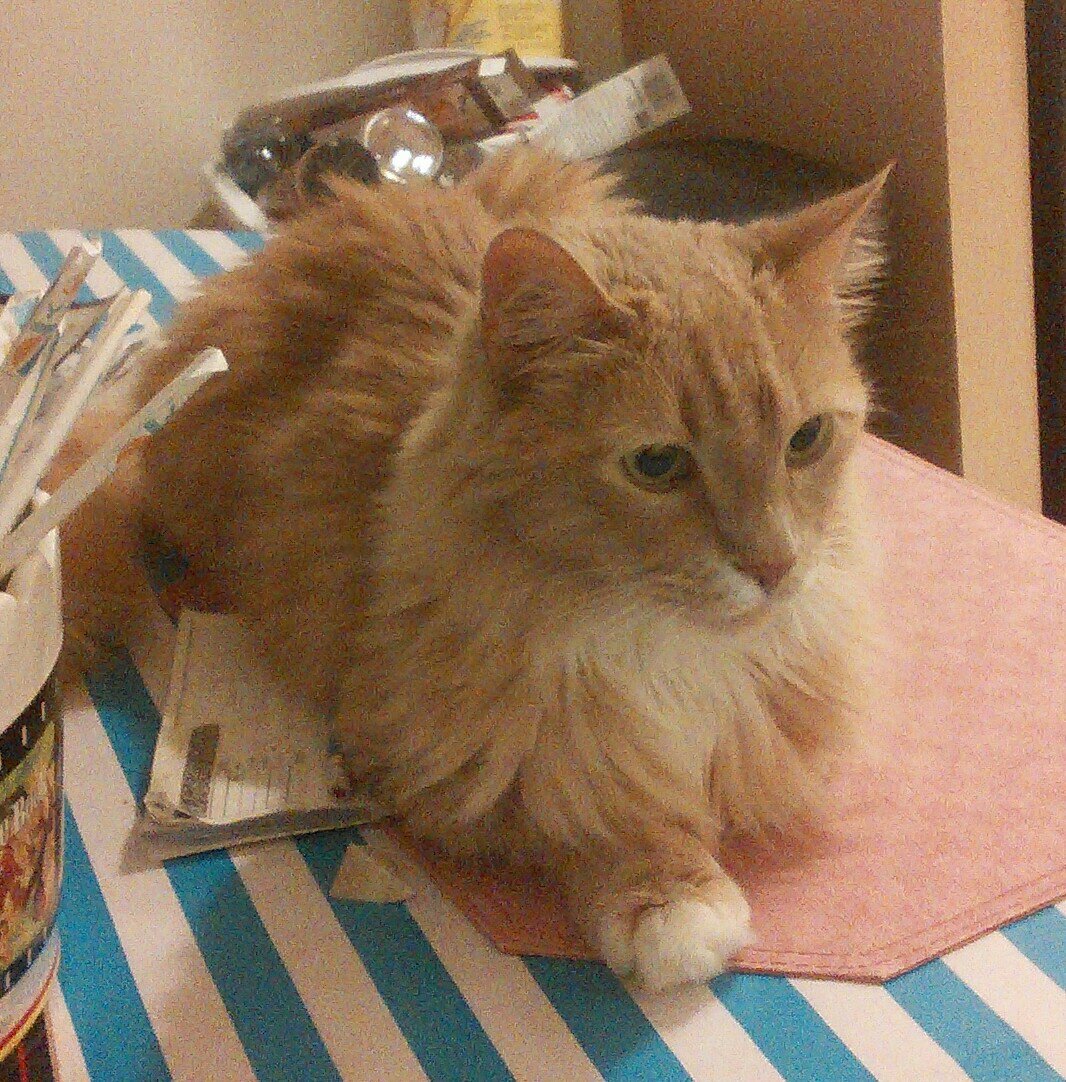 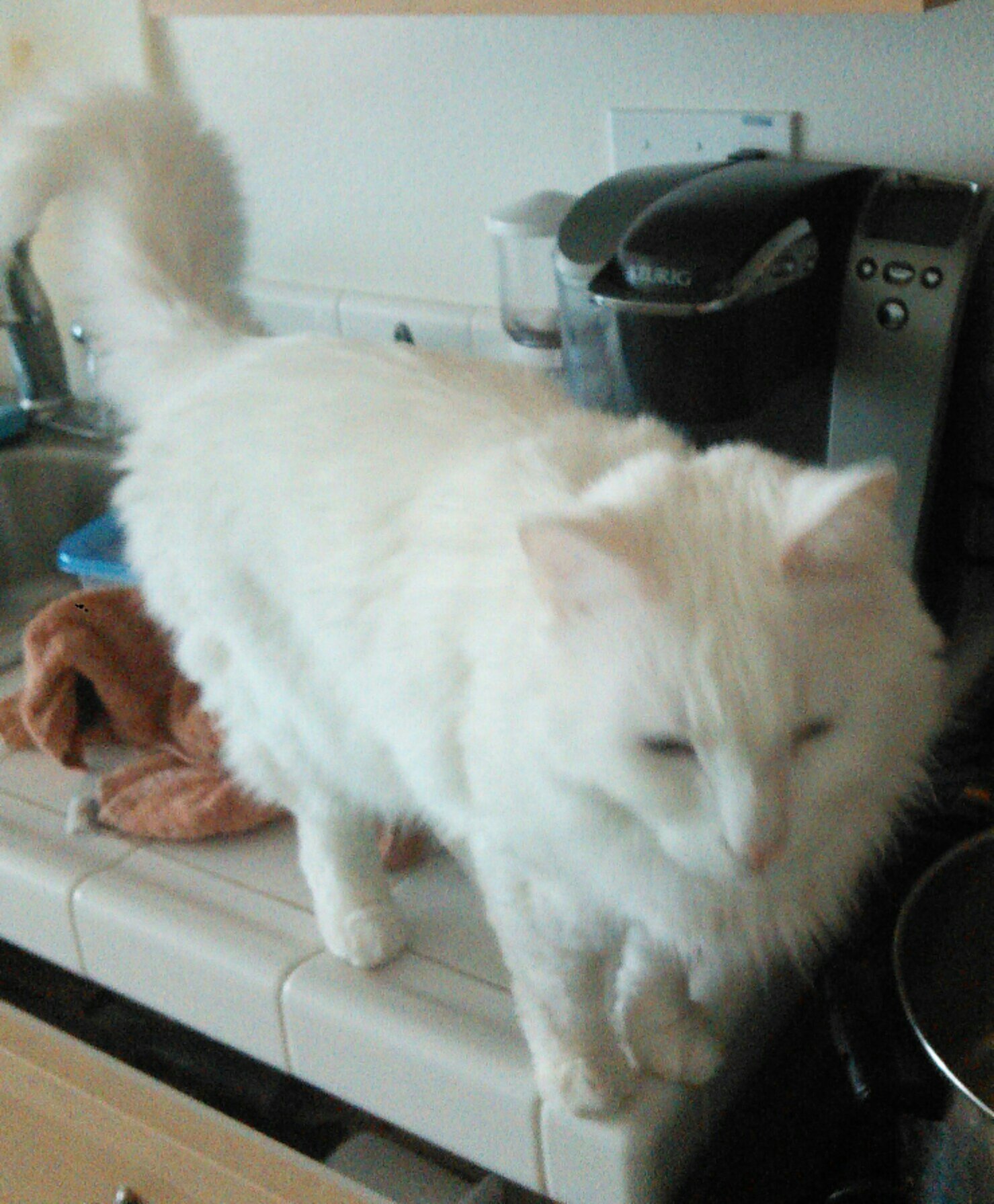 Cookie is an interesting fellow. The moment he hears the door open he races down the stairs, then races back up to fetch a toy which I have absolutely no idea what to do with. I pet him a few times, but I’m still the wary dog-phobe. I don’t hate them, but I’m not exactly friendly either, especially when they try to lick me. Today he pushed Mochi down and furiously bumped him. I had no idea what to say.

JP seems to be warming up to me. He only likes the lady in the room opposite mine, so I frequently hear him scratching at her door adding to be let in. The minute I approach he takes off. I caught him barfing just outside my door once — urgghh. Recently he’ll come up to me but stay just out of reach.

Mochi follows me around and has done so right from when I was still looking the house over. His motto seems to be “if you can’t succeed, just keep trying” which can be annoying when I’m trying to cook and he wants to get at my ingredients. I’ve let him in my room a couple of times but he left hair all over my stuff, so for now it’s strictly petting anywhere outside my room.

Living with pets isn’t so bad if you’re not taking care of them, and that leaves me with not wanting to have any.

As I hurried in through the gate on my way to class, I gave the brief token nod to the deadlocked guy just emerging.

“Hey man,” he called after me, handing me this: 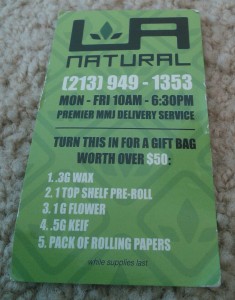 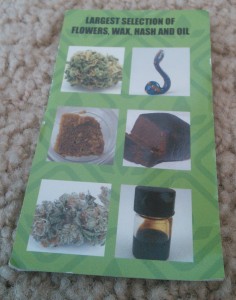 I didn’t lift an eyebrow, because I’m incapable of lifting only one, so I faced him what I hoped was a questioning look that said: “Now what?”

“Just give me a call anytime man.”

And off he went, helping make the world a better place.

What do keif and wax mean for starters?

A little over a year ago, I was complaining about how people choose to wear their watches and the TSA. Fall 2013 finds me pursuing a Master’s degree at the University of Southern California.

In many ways grad school isn’t what I was expecting, and I still don’t know how everything will play out. Being a student again is challenging — homework, reading textbooks, classes — and confusing. I still don’t know what I’m doing here and am playing catch-up in two out of my three classes.

The big university environment looks interesting, unlike my Bachelor’s, and there are lots of opportunities to explore both career-wise and socially. I’ve met quite a few quirky characters you may be seeing in some form here.

After reading all the stories of USC being in a “ghetto” neighborhood, it’s not that bad. I can get home at 2am without watching my back. I couldn’t do that in Port Harcourt where I live, and definitely not in most areas of Lagos. I’ve kept away from the places with really bad reputations (commonsense really). Most of my haunts so far have been in Koreatown (table tennis) and Downtown. I very likely won’t ever do anything in Hollywood. This is from a guy who lived two years in Tampa and never went to the beach.

I have a class in twenty minutes so I’ll leave you with my big to-do list:

People who wear watches on their right hands, or facing inwards…

There was a pretty bad storm in West Virginia last night, which is why I find myself at 5:10am waiting at my gate in Yeager Airport, Charleston for a flight leaving in 50 minutes. The flight I should have been on would have had me arriving at 11:52pm last night.

If you’ve done any flying since 9/11, which you’ve probably done at least once, you know the drill.

Watch off. Belt off. Pockets emptied. Laptop taken out of backpack and placed in plastic bin. Step into the enclosure, place feet on yellow footprints and lift arms above head. Finally, a TSA officer of the same gender strokes your sides sensually, and you’re pronounced ready to fly.

What I didn’t expect was the little addition at the end. A female agent pulled my backpack off the trolley.

“I need to inspect this.”

She frowned when she turned up something.

Please, God, I thought. I hope no one planted crack while I was sleeping.

She held up her prize, a can of Red Bull.

“I’m sorry, but you can’t take this in with you. You can either throw it away or go back out and drink it.”

“So I can’t drink it here?” I asked. I knew the answer but I asked anyway.

“No.” The frown deepened.

“Throw it away then,” I said. No point going back out, taking off my belt… Actually I wouldn’t mind all that. I just don’t like being patted down, all the while hoping your pants don’t fall down.

As I zipped up my backpack, a thought occurred to me. I’d actually gone through security last night with three cans, two of which I consumed during the night.

“Is there any reason I was able to get in with these last night?” I asked, unable to resist the question. I hoped I didn’t sound like a terrorist on reconnaissance.

“I wasn’t working last night,” was her reply.

I believe she looked quite smug and there was a bit of a swagger in her step as she walked away.

And that, my friends, is the most arrogant line I’ve heard from anyone in 8 years.