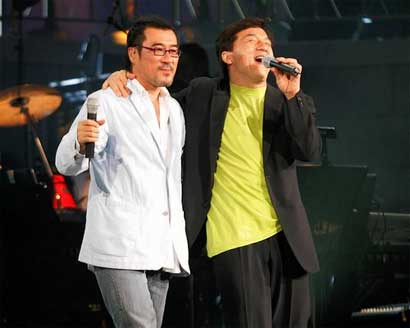 I was going through some Wikipedia articles today, and had to do some minor editing on the Jackie Chan article. Just after I finished making the corrections, I popped into Jackie’s discussion page and at the very bottom, someone had yanked off an entry about Jackie being drunk on stage. He jumped on stage, wanted to sing a duet, and insulted his audience when they heckled him — at least he admitted to being drunk. Now, that’s news.

For someone I consider myself glad to be his fan [even though I’m not as obsessive as most other fans would be], I must say I’m quite shocked at this display of irresponsible behavior. The story’s been Dugg, and Googling ‘Jackie Chan Drunk’ brings up links to stories about his drunkenness on a stage that isn’t Drunken Master or its sequel.

I must say I’m highly disappointed, but in his defense, nobody’s perfect — especially so-called ‘celebrities.’ His son Jaycee must have been seriously embarassed, as Jackie must have been when he got out of his drunken stupor.

Poor Jackie, but I do not take back my comments.